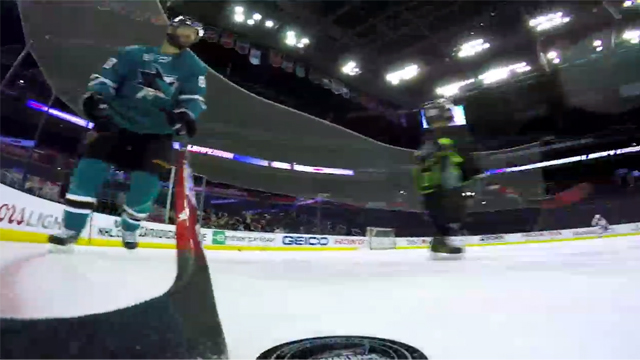 There were a lot of awesome highlights from the NHL Skills Competition last night in Columbus. You can see some of the best in GIF form below. What do you think was the moment of the night?

“As long as the fans enjoy it, I think the guys enjoyed us going out and putting on a show,” captain Jonathan Toews said after the competiton despite his team losing by a score 25-19. “It changes the pace a little bit.”

The GoPro perspective of Zemgus Girgensons in the Fastest Skater Competition. That looks super fast.

Alexander Ovechkin tries to use Roberto Luongo’s goalie stick to knock the puck out of the air during the Breakaway Challenge.

A very unique GoPro angle of Brent Burns skating with the puck before the commencement of the Skills Competition. Out of all of the different types of GoPro cameras and angles that have been used, this one has been my favourite.

Filip Forsberg goes one-hand and tucks the puck past goaltender Carey Price for a great shootout goal. Scroll down to see him put on a stickhandling show in the Relay Challenge.

Shea Weber wins the Hardest Shot Competition registering a shot at 108.5 mph. “You never really know how hard it is until it registers,” Weber said. “It’s different, too. In a game you don’t really see that. Guys don’t skate right into a puck and take a slap shot. Guys are one-timers or standing still and taking it in different situations.”

Phil Kessel, Patrick Kane, and Nick Foligno react to Weber’s cannon which was the second fastest in Skills Competition history only 0.3 behind Zdeno Chara’s record.

Jonathan Toews destroys some targets and nearly goes 4-for-4 in the Accuracy Shooting. He was beat by teammate Patrick Kane who was able to hit the fourth target on one less try.

Ryan Johansen gets some assistance from 7-year-old Cole Vogt. Johansen went on to win the Breakaway Challenge in front of the hometown Columbus crowd.

Nashville defenseman Shea Weber can barely even contain his emotions during the player introductions.

Filip Forsberg puts his amazing stickhandling on display through the lens of a GoPro. This was the Nashville forward’s first ever NHL All-Star event.

After Johansen’s attempt, Jakub Voracek got some help of his own, this time from Johnny Gaudreau of the Calgary Flames.

Mike Hoffman scores an incredible goal during the Elimination Shootout. Probably the best goal of the competition.