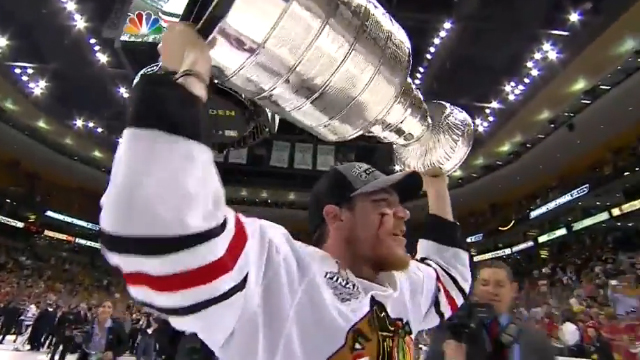 The Chicago Blackhawks are your 2013 Stanley Cup Champions. These are the hardest to write about. I myself cannot believe what just happened, but here’s a simple summary.

Chicago was down by a goal with less than two minutes remaining in Game Six of the 2013 Stanley Cup Finals. If they lost this game, it would mean that the series would be going to a Game Seven.

With 1:16 left in the period, Bryan Bickell tied the game. Then, just 17 seconds later, Dave Bolland scored the go-ahead-goal and the Hawks went on to win the Stanley Cup.

You can watch exactly what happened below. There is no doubt that this game will go down to be an NHL classic.

It’s very ironic that what Chicago did to Boston tonight is almost a replica of what Boston did to Toronto in the first round of these same playoffs. In addition, the Blackhawks were able to score more goals against the Bruins in 17 seconds than the Pittsburgh Penguins in their entire Eastern Conference Final series against them.

“It’s an unbelievable feeling,” Patrick Kane said following the game. “My head is spinning. I don’t know what happened the past 20 minutes.”