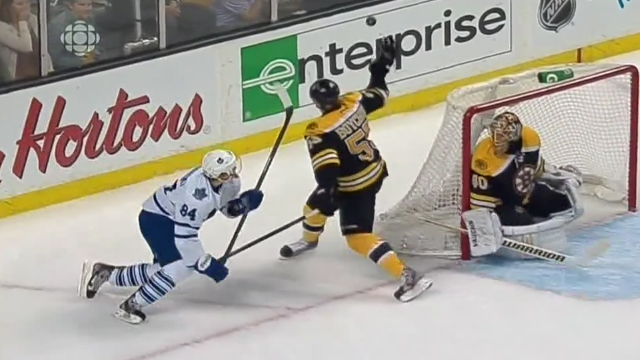 The Toronto Maple Leafs beat the Boston Bruins 2-1 in Game Five of their 1st Round Series. But, it was this Mikhail Grabovski self-pass that stole the spotlight early on. During the first period, Grabovski made one of the most creative attempts to score I have ever seen in my life.

Down low in the offensive zone, Grabovski flipped the puck over the net, sidestepped around defenseman Johnny Boychuk, and then tried to knock the puck out of the air and past goaltender Tuukka Rask.

Unfortunately, he couldn’t get enough on the shot, and Rask made the save. And even if Grabovski had gotten it past Rask, it would have likely been a high-stick, as Grabovski’s stick appeared to be above the crossbar when he made contact with the puck.

“I’ve seen it a couple of times in practice, guys try it,” Grabovski said. “My dad told me always: just try to put it in back of the goalie. It was a nice try but nothing to talk about really because I didn’t score.”

I honestly believe this had the potential to be one of the greatest goals in NHL history! It’s too bad he couldn’t pull it off. A+ for the creativity though.