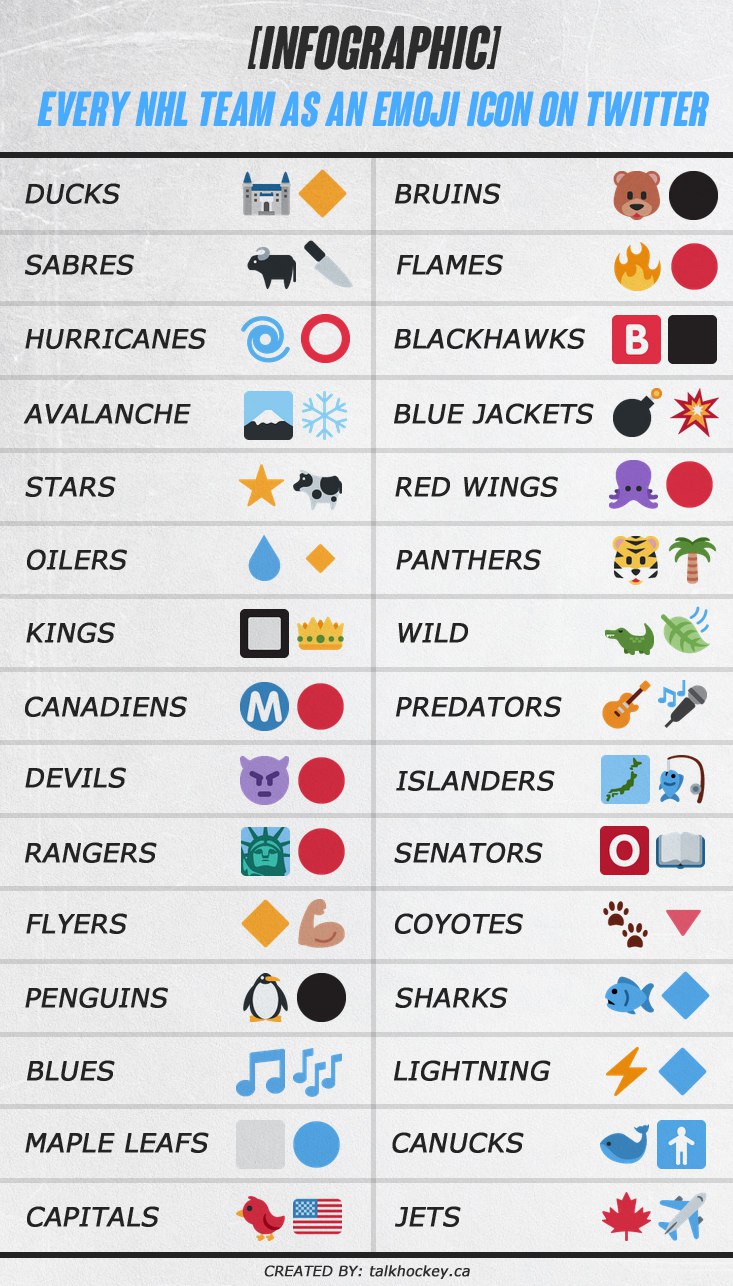 Are you a hardcore hockey fan? Express your love for your NHL team in a whole new way! Emojis “are the ideograms or smileys used in Japanese electronic messages and webpages, whose use is spreading outside Japan” – Wikipedia. Recently, Twitter adapted their social network so users could use these unique icons.

Above is your unofficial guide on how to express every NHL team logo as a pair of Emoji icons next time you tweet. See the full size image here. There are obviously limited Emojis available, so this was a difficult task for some teams.

For example, I was surprised to see there is no Duck Emoji. It would have made Anaheim’s logo a whole lot easier to express. An eagle would have also been perfect for Washington.

– Anaheim Ducks: I went with a castle representing Disney, who used to own the team. I also used an orange colour because it has a prominent role on their alternate uniforms.

– Columbus Blue Jackets: The bomb and the explosion symbol represents the the Goal Cannon the club uses during home games.

– Detroit Red Wings: The Octupus is signifying Detroit’s crazy tradition, which started in 1956.

– Nashville Predators: The city is known as “Music City”, hence the microphone and electric guitar.

– New York Islanders: I had to use a Silhouette of Japan because it was the closest I could get to an Island.

– Philadelphia Flyers: The franchise became known as the “Broad Street Bullies” in the 1970’s when they introduced a tougher, dirtier style of hockey, which was revolutionary to the game at the time. That’s the reason behind the flexed biceps Emoji.

– Vancouver Canucks: I was trying to imply the Green Men by using the silhouette of the man.

I think the most recognizable NHL logo Emojis are the Winnipeg Jets, Los Angeles Kings, New York Rangers, Pittsburgh Penguins, and Calgary Flames. Those are definitely my favourites.