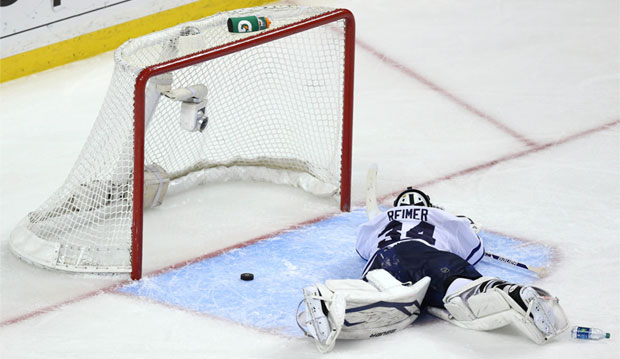 Shock, confusion, and heartbreak. That’s how the Toronto Maple Leafs season ended Monday night in Game Seven of their first round match-up against the Boston Bruins.

Up 4-1 with less than eleven minutes left in the third period, it seemed almost certain that the Leafs were about to upset the Boston Bruins and move onto the second round of the Stanley Cup Playoffs. But, somehow, and against all odds, the Boston Bruins came back and rallied for three goals to tie the game and send it to overtime. Then, 6:05 into OT, Patrice Bergeron scored the winner to cap the incredible comeback and get the Leafs eliminated from Stanley Cup contention.

The goal was Bergeron’s second of the game, with his first being the tying goal. His unbelievable performance earned him the first star of the game.

Words can’t really explain how painful this loss was for Leafs Nation.

In fact, it was the first time a team has overcome a three-goal deficit in the third period of a Game 7 in Stanley Cup playoff history, and fortunately for the Bruins, they were on the winning end. – ESPN

“There’s no way to describe it I don’t think,” Reimer said. “Just an empty feeling really. It’s over and there’s nothing you can do about it. When you go through the season and a goal goes in or somebody scores in the shootout or whatever deciding goal that it is, you know, it sucks but you’ll get them next time. But a case like tonight there is no next time, it’s just next year. So you know, it’s really just an empty feeling.”

Despite the heartbreak, there’s no denying that the Leafs had a special season. They ended a nine year playoff drought and nobody expected them to go seven games with Boston. We’ll see if they can build off this in the future.