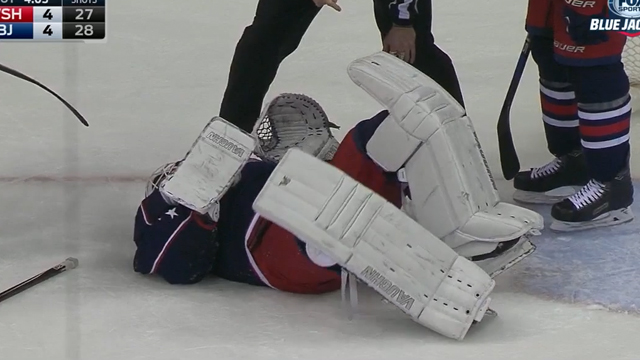 Columbus Blue Jackets goaltender Curtis McElhinney got the start tonight against the Washington Capitals as starting goaltender Sergei Bobrovsky remains injured. In the overtime period, McElhinney tripped in his crease and landed awkwardly on his left leg. He was forced to leave the game because of an injury he … Read Full Post >>

The Fan 97.1 recently posted this isolated audio of Ryan Johansen’s overtime winner against the Coyotes – which lifted the Blue Jackets to a 4-3 victory in their final regular home game – to Soundcloud.

On Saturday night, forward Michael Chaput played just his sixth NHL game representing the newest expansion team in the NHL… The Clumbus Blue Jackets. The 21-year-old rookie hit the ice wearing a helmet that said “Clumbus” instead of Columbus.