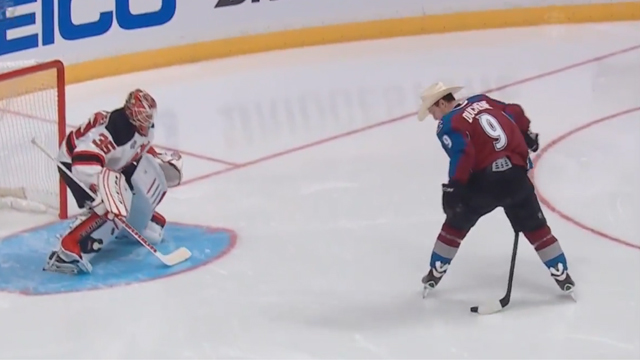 Yesterday’s NHL Skills Competition in Nashville featured some very entertaining moments. Here are some of the best in GIFs. You can also view the full results from the competition here.

“It was one of the best skills competitions I’ve been a part of,” Luongo said. “Just trying to put on a show for the fans. … I think the guys really stepped up today and were creative and did some fun things out there.”

Brent Burns wears a Chewbacca mask in the Breakaway Challenge and the hockey world erupts. Finally, his evolution is complete. Burns said after the competition that he had purchased the mask online from Amazon. [s/t Uproxx].

Jamie Benn and Tyler Seguin checks out Jaromir Jagr’s famous hair. It is the most famous hair in hockey history.

Dylan Larkin breaks Mike Gartner’s record for the Fastest Skater Competition. “I really went into the last lap and said I was going to give it all I had, why not just go for it,” Larkin said. [s/t Capital District Fundraising].

P.K. Subban shows off some very impressive puck juggling and almost scores on Pekka Rinne during the Breakaway Challenge.

John Scott laughs as Patrick Kane is booed by the crowd during the player introductions.

Matt Duchene scores an insane one-handed between the legs goal. The best goal of the night maybe?

Roberto Luongo and Cory Schneider fight over the crease before a breakaway attempt by Brent Burns. They were actually mic’d up and it was hilarious. [s/t Blackhawks Shuffle].